I had a very broken sleep as I had to keep banging the snow off my tent every half hour or so. I know I did sleep though as I dreamt that someone had come to dig me out of the snow with a shovel!

Snow on the roof of my tent

The track is to the left of my tent

I was awake from 5:30am and was surrounded by a lot of snow. I wasn’t sure what to do and as far as I could see, I had two choices:

My concern with waiting out the storm was that I didn’t know how long I would be waiting for… My concern with moving on was that I was worried I would lose the trail now that it was covered in snow and there were no footprints.

I left the tent to try to find phone service and eventually found a very weak signal… enough to message Howard and ask him to check the forecast for me but not enough that I could get on the internet myself. Howard knew exactly where I was because of my Delorme InReach and lucky for me it was the right time of day that he would see the message. He replied saying the forecast was for more of the same today (rain, sleet & snow) and suggested to drink a cup of hot tea to warm up then move on.

I took his advice and boiled water for a large cup of tea and soon after doing so I heard someone coming up the trail.

“Did you survive the night Kat?”
It was JBird and I was ecstatic to hear his voice. I told him to unzip my tent and I passed him the steaming cup of tea I’d just made. JBird was going to try to hike 20 or 25 miles and suggested I start hiking too, now that I could follow his footprints in the snow.

I drank my tea and started packing up when Marathon John also walked past and stopped to say hi. He had been camped about 3 miles behind me on the trail with Rowan, Roxanne, PT & Bill.

I got out of my tent and started scraping the snow off and digging out my tent stakes with my tiny little trowel.

When I had just about packed everything up, my Buddhist bracelet (that was given to me at Temple 1 on the Shikoku 88 Temple Pilgrimage and I’d worn everyday since), broke.

Had this happened any other day I would be upset. The fact that it happened today after not much sleep, snow, cold and feeling totally alone… made me even more upset and I had “another” moment. This was my lucky bracelet…

Roxanne then walked past and gave me a hug and I told her I would be just a few minutes behind.

I picked up my pack and started following the footprints in the snow. It was 8 miles to the fire station where I was going to fill up on water and the first 6 miles of the trail was covered in snow, slushy footprints and most annoyingly, poodle dog bush. 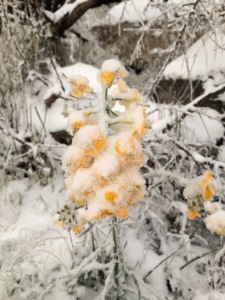 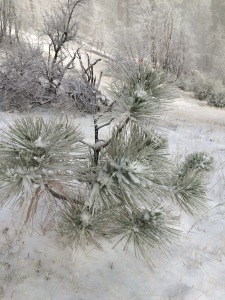 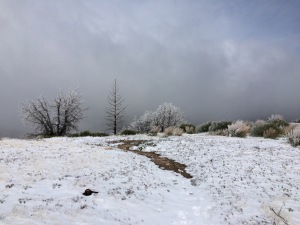 Roxanne & I arrived at the Mill Creek fire station where Marathon John was waiting for his tent to dry inside the toilets. We went to the picnic table behind the fire station and set up our own tents to dry out then I cooked a mashed potato and had a cup of tea for lunch – it was so cold!
We still didn’t have any phone service and the dark & gloomy clouds were gathered in the exact direction we were headed. After almost a 1 hour break in the cold wind at the fire station, I packed up my now dry tent and headed back up the mountain into the clouds. 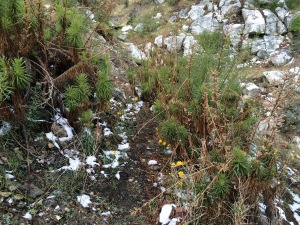 I walked on another 12 miles navigating my way through the poodle dog bush that was absolutely everywhere and finally came to the Messenger Flats campground. The campground is at 5,886 feet and while there’s no snow on the ground, it’s freezing!!! I thought it would be a popular spot but it’s just me and JBird and I’m very grateful that it’s just cold and not stormy or raining. 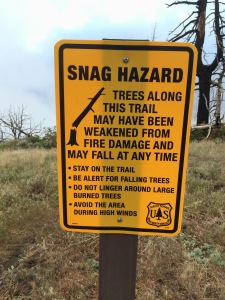 Not what you want to see when looking for somewhere to camp!