I was up early and delighted to be walking in cool weather (14 degrees) for a couple of hours. It was another hilly day with the morning spent walking along a mix of forest/bush/cobbled paths with a thick mist that sprinkled rain on me – perfect walking weather! 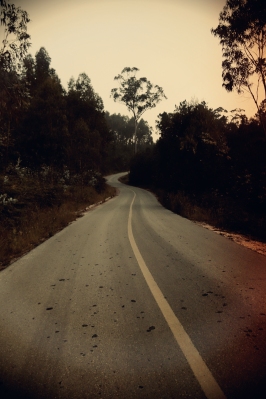 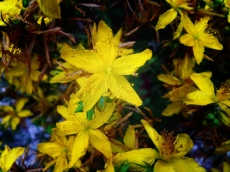 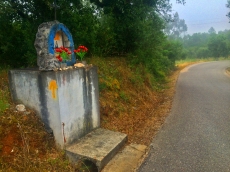 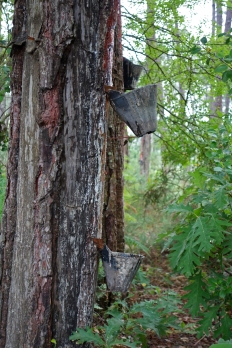 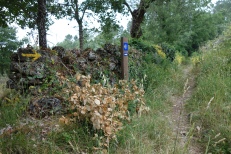 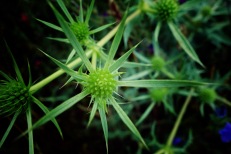 I stopped in a biggish town after 15km for a toasted sandwich and my first coffee on the camino, until now everyday had been too hot for me to consider drinking a hot drink! This town was a little shopping paradise and I managed to buy a new pair of insoles (€1!), and buy gaffa tape to fix the inside cushion on the heels of my shoes. And then I was off again.

I arrived in Rabacal and checked into Casa de Turismo do Rabacal, the only accommodation option in town. Not bad for my own room, own bathroom, sheets and towels for €15… More expensive than pilgrim albergues but still very cheap!

2017 – there is now a new Albergue ‘O Bonito’ in Rabaçal run by the lovely family who own the adjoining cafe, opposite the church, it’s modern and has a pool!

There were 2 sightseeing options. Some roman ruins 1km out of town or a medieval castle 6km out of town. The lady in the museum next to my accommodation said she could take me on a tour around the ruins and that there was a beautiful mosaic there, except that the mosaic was covered up so I would only be able to see some foundations. Based on that I decided to go to the Castle in Penela instead but there was no way I could walk an extra 12km so she called me a taxi 🙂

The taxi driver was a lady in her late 50s (Maria) and her grandson Tiego – Tiego came along because he spoke English and Maria didn’t! They dropped me off at the castle and we arranged for them to pick me up 1.5hrs later. The castle, in my view, was better looked at from afar rather than inside, but still interesting enough. I had time to also go to the supermarket and stock up on supplies for tomorrow then I waited in a cafe watching the World Cup and drinking a vino tinto with the local old men.

2017 – having now seen both the castle in Penela, and the roman villa in Rabaçal, including the sand-covered mosaics (which they dust the sand off for you to view), I recommend the roman villa, however, if you’re planning to visit Conimbriga (a must-see) then you’ll see plenty of mosaics there so you could visit the castle instead, but it’s a mighty detour! 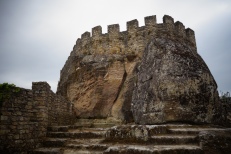 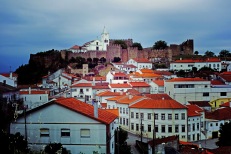 Maria and Tiego picked me up and when we got back to Rabacal they invited me to have a drink with them in the nearby cafe. We had a lovely conversation, they were both so friendly and helpful and I was glad to have met them. 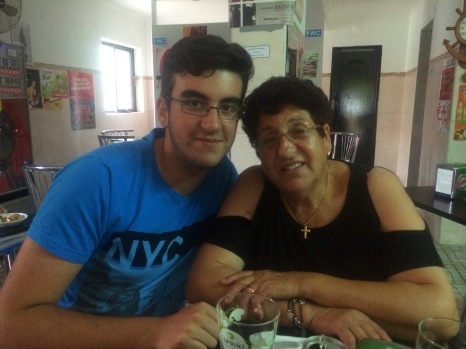 The lovely Maria and her grandson Tiego

I went straight to the only restaurant in town for dinner and there I met a Canadian couple (Jeanie & Gerry) who are cycling the Camino. They were the first pilgrims to meet so far after walking for 8 days! We had dinner together and then also met an Italian man who is walking the camino but doesn’t speak English.

2017 – there are now a couple of restaurants/cafe in town

It was a lovely dinner and I was happy to have finally met some fellow pilgrims.

Back in my room I gaffa taped my shoes and hope that it will fix the issue! (The heel has worn away which is putting holes in my socks and giving me blisters on my heel). 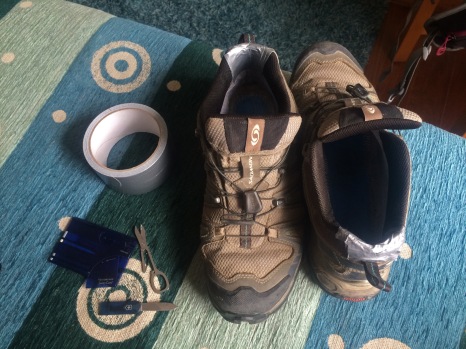 Trying to fix my shoes!