As we went to sleep last night we were trying to figure out how far behind Mr & Mrs Smith were (probably only a couple of miles) and how far ahead Teflon & Shepherd were – possibly 10 miles ahead?

We didn’t get rained on which was nice but I did wake quite often through the night and saw stormy clouds passing overhead.

KC and I left camp just after 7am, hoping for a 26 mile day and also hoping to meet the others. There were a few climbs and after the second big one we decided to have a break under a tree on top and eat a second breakfast. Treeman & Hedgehog were also there taking a break. After about 10 minutes, Mr & Mrs Smith came past 🙂 Turns out they were camped 1/10 of a mile behind us last night but didn’t know about the campsite we had found! Mr Smith handed me my groundsheet which I had accidentally left behind drying on a railing at the church.

We left together and decided to make our next water source, Alder Spring, our lunch break. It was a lovely spring with delicious, cold water and we found a nice shady spot under a tree to eat lunch. I was so hungry I cooked ramen and ate it in a tortilla with hot sauce – it wasn’t too bad. 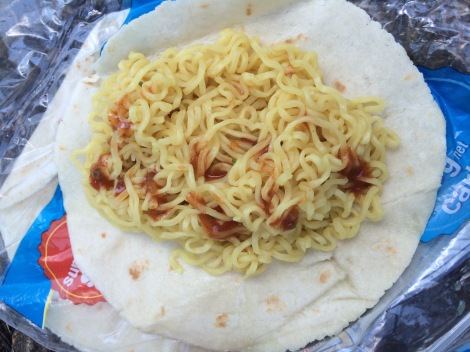 When we started walking again just after lunch, I rolled my ankle again, what seems to be a daily occurrence now. Usually it makes a loud pop, sends a shooting pain through my foot, I feel sick for a second but then I’m able to put my weight on it again. Today it was the most excruciating pain and I was really worried that I wouldn’t be able to stand on it at all. I told the others to go ahead (they didn’t until I insisted), I took painkillers and ibuprofen, then I very slowly tried to walk. I was incredibly slow and the painkillers didn’t kick in for at least an hour. Each step brought tears to my eyes.

Just when I thought it was getting easier to put my weight on my ankle, I felt a stinging sensation on my right calf. I looked down and saw a large yellow bee. Seriously?! Of all the moments to get stung by a bee, this just didn’t feel fair. The sting burnt and throbbed but at least it hadn’t left behind its guts on my leg.

There was one long 3.5 mile descent to get to the campsite we had chosen and the others were worried how I would cope with the downhill on my ankle. I thought it was probably better to do it today while my ankle was warm rather than first thing in the morning before it had had a chance to warm up, so we pushed on.

The view of the gorge as we came to the bridge over the Middle Fork Feather River was stunning. We’re camped with Dundee, Lone Star, Treeman, Hedgehog, Mr Clean & Sinbad, by the river. 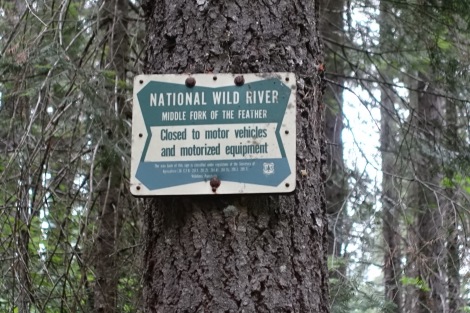 We set up our tents then all went down to the river to wash clothes and bathe before dinner. I happened to have a snickers from England in my food bag, as well as one from America, so we had a blind tasting and everyone agreed they tasted very different. The UK snickers won the taste test. The other interesting thing is that the UK normal size snickers is half the size of the American one!