It was a freezing cold morning, and knowing that we only had a short day to get to Kennedy Meadows resort (to resupply), I warmed up by having hot oats for breakfast.

We started hiking at 7:45am and had 4 miles of switchbacks up. The switchbacks were a really nice gradient but it was still hard going because the ground was gravel and my feet were continually slipping. 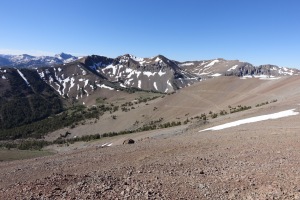 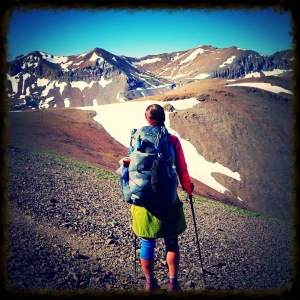 Looking back the way we had come

The terrain quickly turned from mountains we were used to, to volcanic rock and the colours were beautiful – natural earth tones of reds, browns, yellow, green…

There were heaps of snowfields that we had to walk through, almost more than in the heart of the sierras, and they were quite icy too. 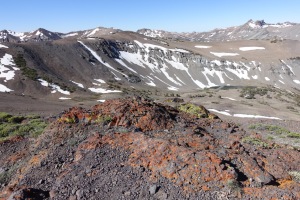 Lychen on the volcanic rock 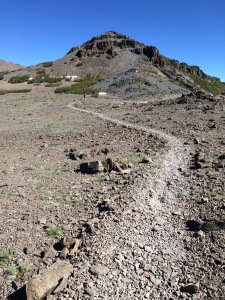 When we got to Sonora Pass and the highway we saw a sign saying that there was a company who will bring your resupply to the trail and send back your bear canisters, and that they were currently in the car park. The chance to get rid of our bear canisters was too exciting so we went straight to the car park to see these wonderful people. The cost was $15 including priority mail postage so we emptied out our bear cans, washed them and handed them over to be sent back – thank you to the loan program at Grumpy Bears for loaning me this can 🙂 The two men in the car park had a truck with food in it and they showed us their prices – very reasonable, so we decided to do our resupply right then and there with them. I was able to buy almost everything for the next section except more deet. We probably could’ve got back on the trail after resupplying here in the car park except that we’d been fantasising about the real food that we’d be able to get at Kennefy Meadows Resort (a 10 mile hitch down the highway) so we set off towards the road. There were 4 of us trying to get a ride and lots of cars drove past, but then one car stopped and the guy inside asked through the window if I was Kat? I couldn’t believe it, it was Barista (and his mum Llama) and I hadn’t seen Barista since Mt Laguna campground, the first week of the hike! They only had room for two so Teflon and I got in and hoped that it wouldn’t take too long for Mr & Mrs Smith to get a ride.

On the way down the windy road we came across an accident between a very long truck and a small white car on a hairpin turn, no-one was hurt but it looked like they had both tried to get around the corner at the same time and both failed. We waited about 45 minutes before the truck was able to reverse enough for traffic to go past.

Arriving at Kennedy Meadows Resort was like stepping into a wild western with cowboys.  Lots of cowboys and all of them wearing cowboy shoes with spurs. We asked about getting a cabin for the night but they were all full and the only accommodation they had available was the dorm room upstairs for $35 pp. The price was alot more than we wanted to pay but it included laundry and a shower and the room was for 5 people (and there were 4 of us), so it was almost a private room. We paid then put our washing in the machine, changed into our rain gear and went to the restaurant for a lunch of chilli cheese hamburgers and root beer. They were good.

After lunch we showered, bought more food, deet and icecream from their store and repacked our bags. Before bed we went over to the saloon bar for a nightcap and chatted to lots of the local residents. 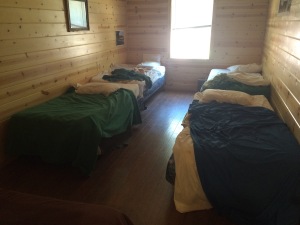