The Kumano Kodo is a network of ancient pilgrimage trails linking the former capitals of Kyoto and Nara to three sacred sites in the mountainous, rugged and exceptionally scenic Kii Peninsula:

In 2004, these three sacred sites and the pilgrimage routes that connect them were given Unesco World Heritage Status under the title, “Sacred Sites and Pilgrimage Routes in the Kii Mountain Range.”

These sacred sites and the connecting trails “reflect the fusion of Shinto, rooted in the ancient tradition of nature worship in Japan, and Buddhism, which was introduced from China and the Korean Peninsula. The sites (495.3 ha) and their surrounding forest landscape reflect a persistent and extraordinarily well-documented tradition of sacred mountains over 1,200 years.” – Unesco site

Sacred Sites and Pilgrimage Routes in the Kii Mountain Range

The ancient pilgrimage trails connecting these 3 sacred sites are:

For an overview map of the routes, see Tanabe City Kumano Tourism Bureau and Visit Wakayama 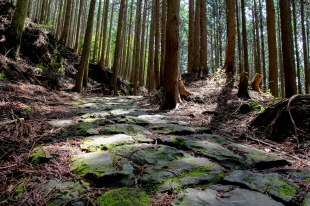 Moss-covered stone path along the Nakahechi

First view of Hongu from Fushiogami-oji

A huge thanks to Brad and the team at the Tanabe City Kumano Tourism Bureau for all of their help and terrific website.

18 responses to “What is the Kumano Kodo?”