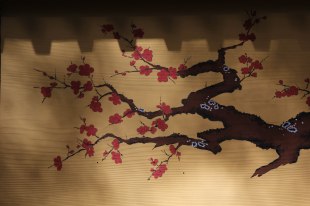 I love this peeing-boy keeping the drinks cold! 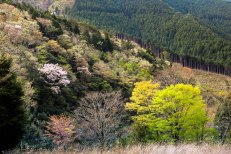 Sprinkles of cherry blossom in the evergreen forest

2. The second part from marker #40 along the detour to Yukawa-oji was the hardest part of the day involving a long, steep climb with terrific views, and two snake-sightings!

Going up and up

Be careful of starting fires with cigarettes

3. The third section from Hosshinmon-oji to Hongu Taisha was the easiest and widest path of the day, with two stunning viewpoints. The first at Fushiogami-oji is the first view pilgrims would have of Hongu, and the second with a slight loop detour off the trail, was a beautiful view of Oyunohara Giant Torii Gate – the largest torii gate in the world and the original site of the Hongu Taisha Grand Shrine (before it got partially washed away in a flood in the 1800s and moved uphill to its current location). 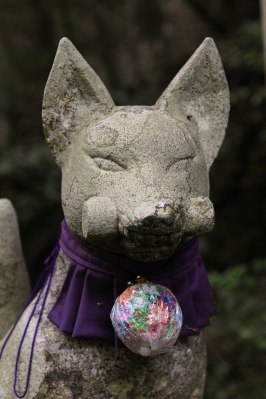 First view of Hongu from Fushiogami-oji

My written oracle that I picked out of a box in Hongu Taisha… here’s hoping I’m not walking so late at night that I’m under the moonlight!

My accommodation for tonight is in Kawayu Onsen which is one of the three onsen areas close to Hongu Taisha, the other two are Yunomine and Wataze. There’s a 3km trail connecting Yunomine with Hongu but for Kawayu and Wataze (and Yunomine if you’re tired), the easiest way is to catch the bus from Hongu. It’s ¥300 between Hongu and any of these three onsen resorts so after spending time at Hongu Taisha and Oyunohara, I caught the 4.58pm bus to Kawayu Onsen. Dinner was another incredible feast and I especially loved the Kumano beef which I got to cook myself on the small candle-burning grill.

A camino marker in Hongu! Apparently it’s 10,755km to Santiago from here… time to get walking!