Breakfast was included at the hotel so I requested a Japanese breakfast (rather than a western as a Japanese breakfast is more filling, often a western is just a piece of toast and fruit). I left the hotel and walked back to the trailhead for Matsumoto-toge pass and started up the Edo period (1603-1868) flagstone path and 15 minutes later, I was at the top. There was a tall life-size jizo statue at the top with a bullet hole. The story goes that a farmer crossed the mountain one morning then before he came back in the evening the statue had been erected. When he saw the statue on his return journey he thought it was a ghost so fired his gun and apparently that’s why there’s a bullet hole in it.

Today was the first overcast day all week so my first view of the Hongu mountains and Shichiri Mihama beach was unfortunately quite grey and dull!

I descended Matsumoto-toge into the town of Kumanoshi and was surprised not to see better waymarks being so close to this popular mountain pass. After walking through the old streets of Kumanoshi, the trail apparently meanders along the beach (according to the mao) which was really difficult because of the giant pebbles and I don’t recommend it! There were warning signs along the beach for the kite hawks because they’re known to swoop down and steal food. (I actually had this happen to me years ago when I was sitting on the beach in Kamakura eating a Haagen Daaz ice cream and a hawk swooped down and stole the cup out of my hands!)

Walking along the annoying pebbles on the beach I passed the Shishi-iwa lion rock, a designated National Treasure, but it’s a bit hard to see the lion face from the angle where I was on the beach, the picture would probably be better taken from the road, don’t walk along the pebbles! The next sight the trail passed was the Hananoiwaya 45m high rock which is said to be the gravestone of the mythological Goddess Izanami who gave birth to many Shinto deities. Opposite this rock shrine there was a michi no eki so I bought lunch and ate it there.

I must admit, I knew today was going to be around 27km but I thought it was going to be an easy day walking by the beach. It actually became the most frustrating day of all! The path followed a sea wall for a few kilometres which was fine, but then often stopped and started when the sea wall suddenly disappeared so there was a lot of rejoining the highway/forest path/seawall. You could just stick to the road and plug in your earphones but it wouldn’t be the nicest walk. It seemed to take so much longer than it needed to. A few waymarks in key places would go a long way!! 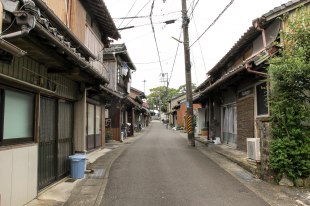 Watch out for hawk kites swooping down and stealing your food on the beach!

Mehari zushi, mochi and barley tea for lunch at the Otsuna-chaya michi no eki, Kumanoshi

Having a break on the sea wall 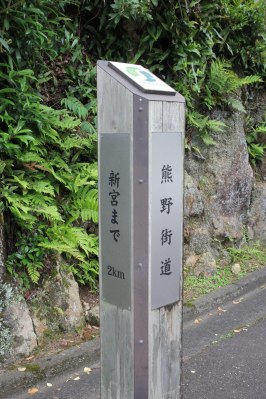 I finally crossed a bridge over the Kumanogawa river and was back in Shingu then paying my respects at Hayatama Taisha Grand Shrine. I was glad today was over but actually quite sad to finish the Iseji trail which I really enjoyed. I loved walking along the old small roads through villages, meeting the elderly locals, all of the scenic mountain passes, the white sand beaches, the incredible hospitality and delicious meals each day at the accommodations, and the sense of adventure. It’s hard to recommend this path if you don’t speak or read Japanese which is a real shame, but I hope someone will mark the trail so more people can walk it.

In Shingu I went to the Tourist Office and asked for a recommendation for somewhere to stay for the night and they told me about Guesthouse Fukuroku where I am now. The lovely owner came and picked me up from the tourist office and brought me to her home where she has two rooms that she rents out. I’m planning to head back to Tanabe tomorrow and pick up a map of the Ohechi route and start walking it in two day’s time.

Bridge over the Kumanogawa river, Shingu