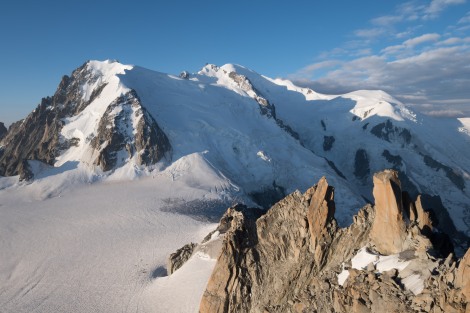 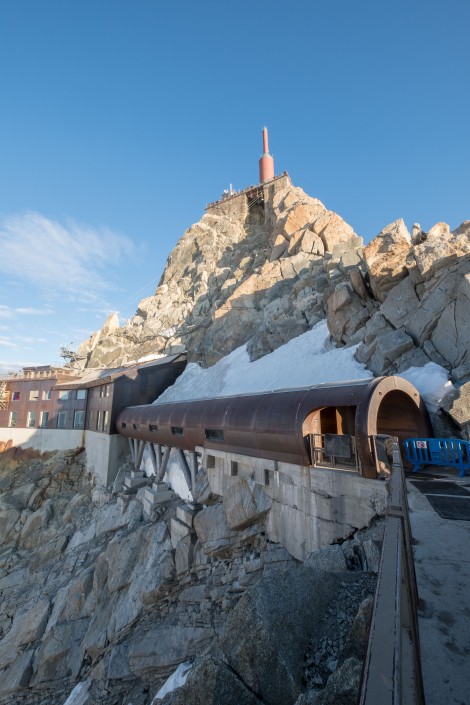 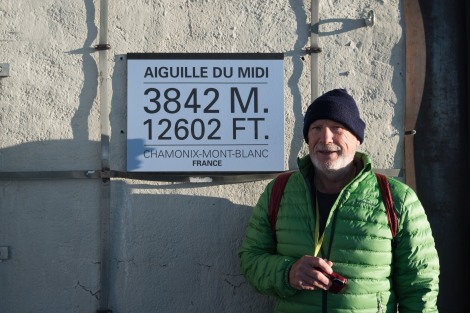 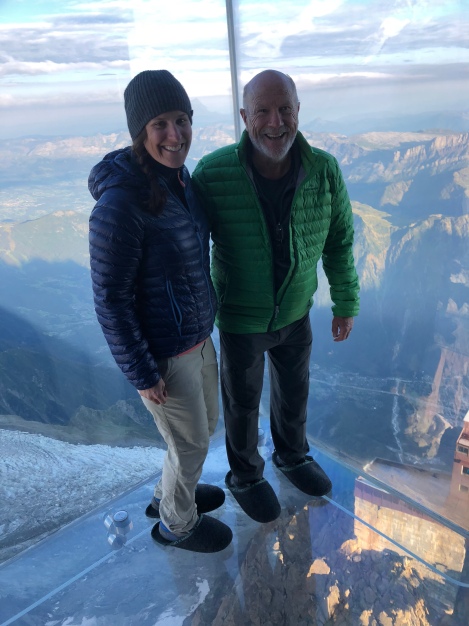 We did and saw everything there was to do at the top, before dad told me he was dizzy and thought he might faint! In the initial planning stages of the TMB hike, we were both worried how he would be at altitude because he’d had trouble breathing a few years earlier at altitude in Canada. It had been weighing on my mind everyday as we climbed to ~2,500m, but now we were at 3,842m, the highest he’d ever been without being in a plane. So now my anxious and worry-thirsty mind was thinking about dad having altitude sickness or a brain aneurysm and all I wanted to do was get him down off the mountain! We left straight away and he felt better as soon as we got down. We also made it back to the hotel in time for the included breakfast.

As the morning had taken a big chunk of time out of our day, we caught the bus along the valley to Les Praz (the driver didn’t charge us) and took the cable car up to Refuge de la Flegere.

Catching the bus from Chamonix to Les Praz 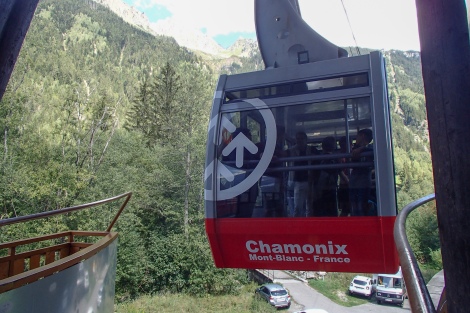 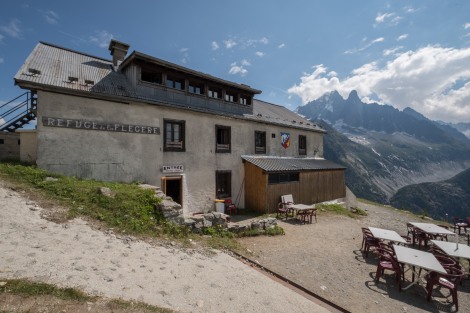 After an initial descent to rejoin the TMB, we began climbing, and looking back for views of Mont Blanc. We filled our bottles at a waterfall shortly before passing the small building of Chalet des Cheserys. 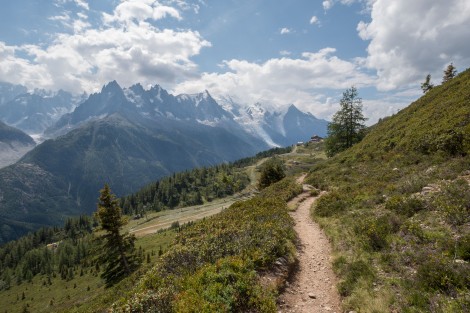 Looking back at Mont Blanc

I’m really hoping this rock is to keep away the impending thunder!

We knew there were two options today; either the steepest descent of the entire TMB along a section of steel ladders and ropes, or a longer / easier section which was recommended in bad weather. Initially the bad weather was due to hit at 2pm, and we arrived at the junction at 1:30pm. I was nervous about taking the ladders and even more nervous about the steep trail, as this was the first time the guidebook had said it would be steep (but plenty of other days were steep to me when terms like ‘gentle’ or ‘steady’ were used!) Dad was up for the challenge, and before we could even have another conversation about it, he was bounding downhill towards the steep option.

Just as we arrived at the first vertical steel ladder, a clap of thunder erupted and a part of me wanted to cry and retreat! Dad trundled down the first one (actually on his knees – you’ll have to wait for the video), but I didn’t find the first one too difficult – they got more difficult for me with each one, as the ladders overhung the cliff and you couldn’t see where your foot was going to land… It was heart-raising and nerve-wracking, and it was the very first time on the entire trail that I wished we were walking in the opposite direction so we could be climbing up these ladders and not falling down them.

The steepest part of the TMB – I think these steel ladders would be better climbing up, not down as we were! You can see the village that we’re headed to in the valley!

Dad hasn’t gone splat… he’s just waiting at the bottom of the vertical ladders for me to climb down!

Dad was invigorated when he reached the bottom of the ladders, and I’m so glad he convinced me to do it. We both overcame the challenge. From Tre-le-Champ, we left the TMB and took a side-trail to descend to Argentiere (there is a bus but we wanted to walk). It was a lovely trail and took ~40 minutes. 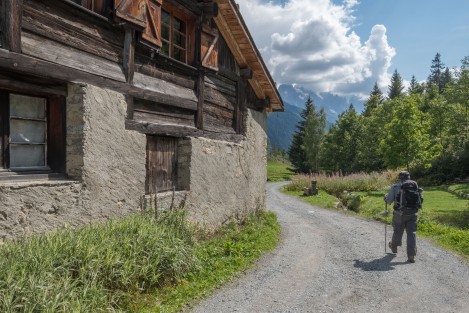 Passing through Tre-le-Champ on our way to Argentiere

A waterfall on the way to Argentiere

Argentiere is a perfect hiker-town, compact with everything you need. After checking in, we walked around to explore, then went to the recommended Pizzeria called Stone Bar. I ate an amazing pizza for dinner, and dad had a duck salad which he thoroughly enjoyed. 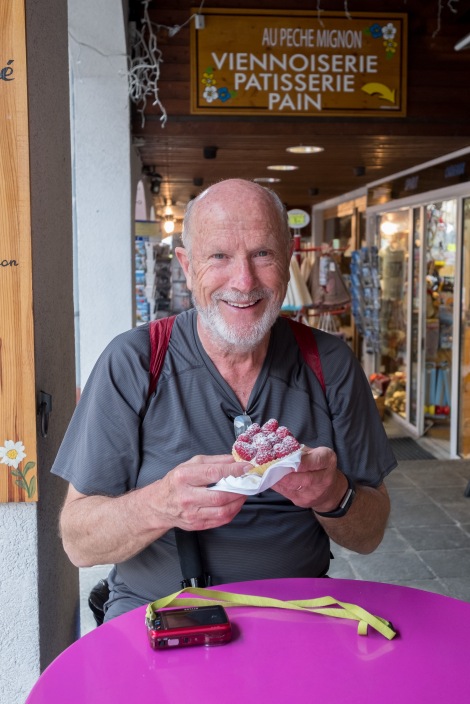 Look at that smile and that raspberry tart, in Argentiere. 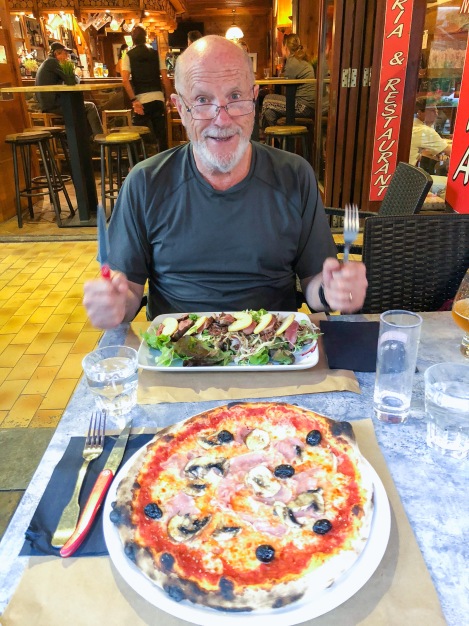 Dinner at Stone Bar in Argentiere

I wouldn’t have taken the ladders if I’d been hiking by myself, so I owe dad a big thank you for pushing me outside of my comfort zone and making more memories together that I’ll cherish forever.