The alarm was set for 6:15am today, but we were both awake beforehand. For the first time on the trip, the forecast was for rain from 11am (rather than starting in the afternoon), and the percentage was increasing each hour so we agreed not to take the high route to Col de Balme (not recommended in bad weather), and instead take the low route from Le Tour. We arrived at Le Fournil bakery next to the pizzeria we ate at last night soon after it opened and shared a delicious breakfast of quiche and almond croissant (and a ham/cheese croissant for dad). We ordered a baguette to take away for lunch. 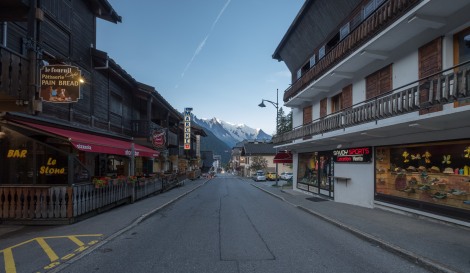 The main street in Argentiere

After breakfast we caught the bus to Le Tour, but in hindsight, we should’ve walked this instead, it’s not far. When we arrived at Le Tour, we asked someone if they knew where the TMB trail was and they told us where it was, then said the cable car opened at 8:30am and that it would take 20 minutes to get to where we wanted by cable car or two hours walking. It was 8:15am which meant only waiting 15 minutes and I couldn’t convince dad to walk up instead. We waited the 15 minutes and bought the tickets (with hindsight again – it would now have been better for us to buy the Mont Blanc cable car pass for three days), but soon realised only the ticket office opened at 8:30am… the cable car didn’t start until 9am!! I suggested trying to sell back the tickets and walk, but the logic of 20 minutes vs two hours couldn’t sway dad to walk!

We were joined in the cable car by a border collie who raced in between our legs, followed by the shepherd, apologising for his dog. They were on their way up the hill to tend to their cows. The chair lift was the best one yet and we could both fit on one, even with our packs. We had stunning views looking back at Mont Blanc.

Riding the chairlift up to Les Autannes

Reaching the French/Swiss border of Col de Balme (2191m) a short walk from the chair lift felt a bit like cheating today… but I don’t think either of us realised just how short our day had now become by taking the cable car and chair lift. All that was left to do was to descend to the village where we were staying the night! 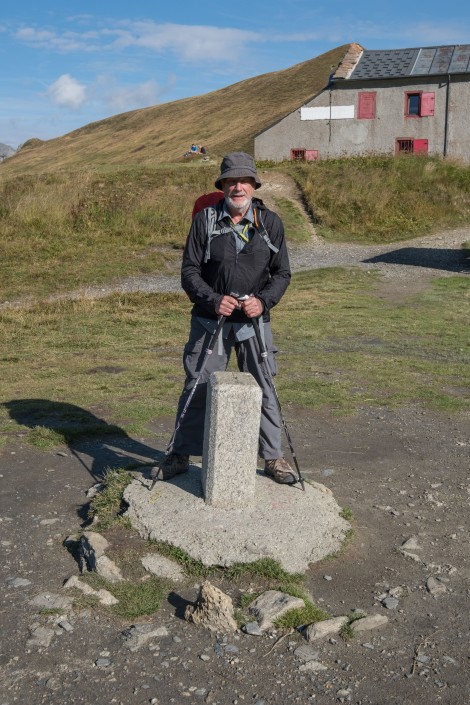 Standing on the French/Swiss border at Col de Balme, 2191m 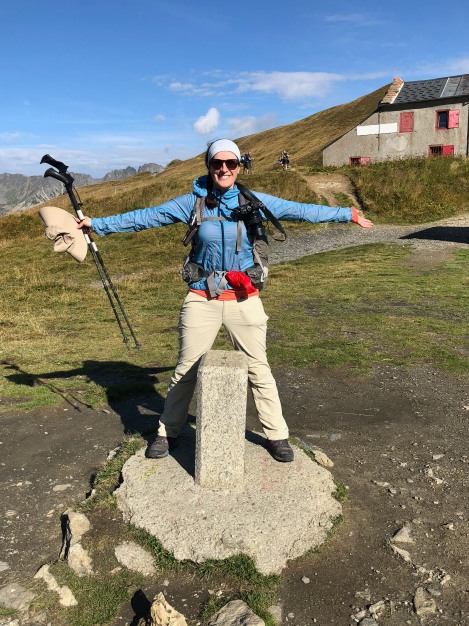 Standing on the French/Swiss border at Col de Balme 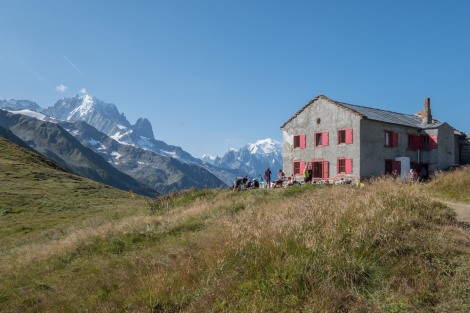 Looking back up at Refuge du Col de Balme

Looking towards Switzerland and the village we’re headed to, Trient 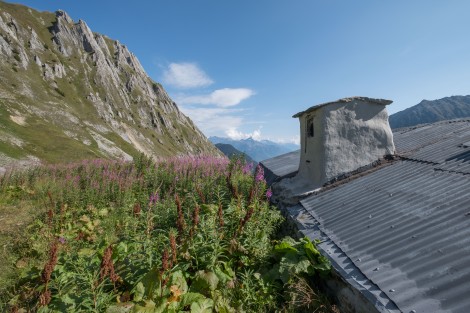 An old shepherds hut between Col de Balme and Trient 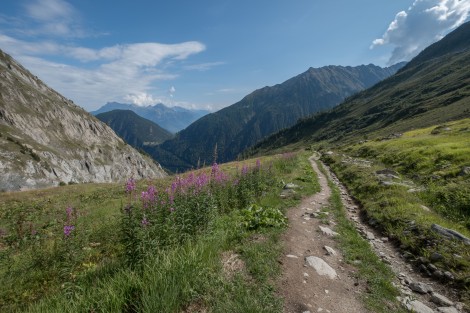 We passed dozens of people who had stayed in Trient and were climbing up the long ascent as we were leisurely descending, full of unspent energy!

A Swiss cow with a very large bell

Looking towards the villages of Le Peuty and Trient

We embarrassingly arrived at our accommodation in Trient around 12:45pm and check-in wasn’t until 2:30pm. There was an attached terrace so we made ourselves comfortable, bought some drinks and ate the baguette we’d bought a few hours ago in Argentiere. After an hour or so, dad looked up and said he thought he’d seen Roy and Randy, the American brothers we’d met at Refuge des Mottets. I replied that it couldn’t be possible as we were walking opposite directions, but when I turned around, it was them! We invited them to join us and were (and still are) baffled as to how we’ve met again! We caught up on trail stories and before long it was time to check in. Dinner was available at the accommodation for CHF 19 pp and as we’d seen no other place to eat, we opted for the pork and rice option (the other choice was fondue).

Our home for the night at Auberge du Mont Blanc, Trient

Our room for the night at Auberge du Mont Blanc, Trient

We did some exploring around the tiny village before being sat beside Roy and Randy again at dinner.

The village of Trient

Looking down on the village of Trient from the church

A night-time view of Trient from Auberge du Mont Blanc

We laughed non-stop talking about favourite places along the trail, them accidentally repeatedly touching the electric fences (some of the fences don’t look electric), dad thinking the bidet was for washing clothes, toilet stories along the trail, and dad mistakenly asking a couple today if they were father and daughter (they were married!) It was a wonderful way to spend our last evening on the TMB. 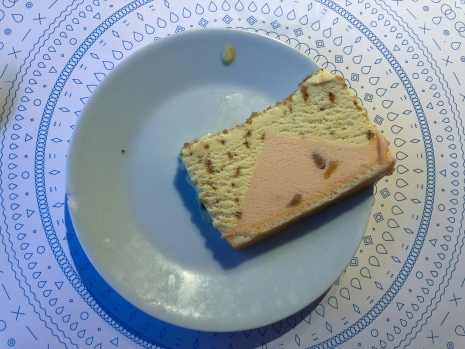 Now in bed, dad’s got a pain in his head and I’m worried it’s an after-effect of being at altitude yesterday. I keep waking him to make sure he’s still breathing… this could be a long night!