When staying in accommodation it’s much harder to get up early than when I’m in the tent (mainly because there are usually curtains and the light doesn’t wake me at 3am!) So I was impressed with myself that I was up at 6am, and out of the hostel before 7am. It was a wonderful hostel with friendly owners and felt like a mini-break. 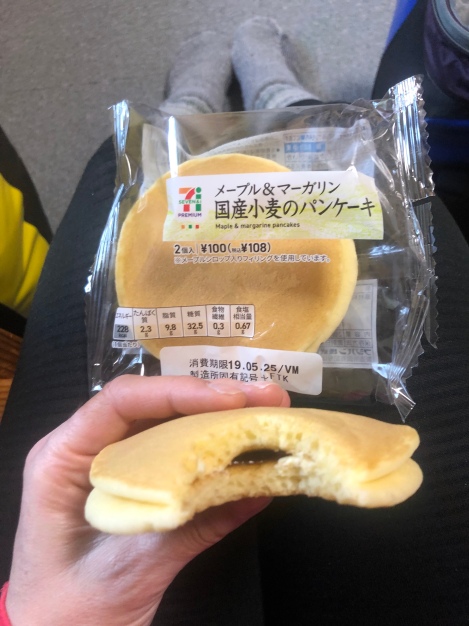 Unhealthy but I’ve lived on these hotcakes with maple syrup and margarine for breakfast!

The scenery was beautiful; farms, rice fields, mountains, rivers and rolling hills. I’m starting to think I prefer the countryside to the coast. 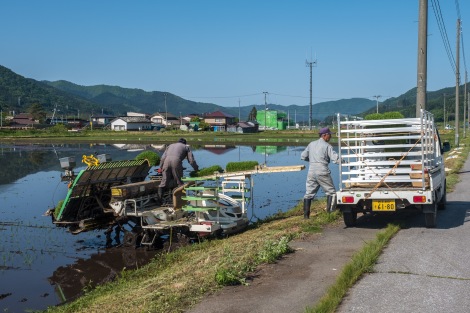 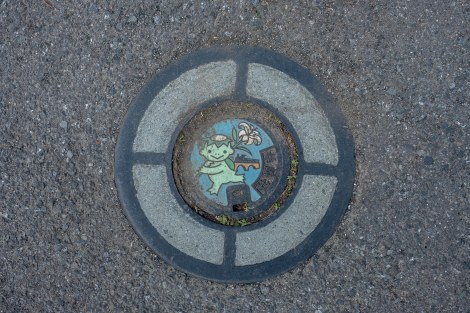 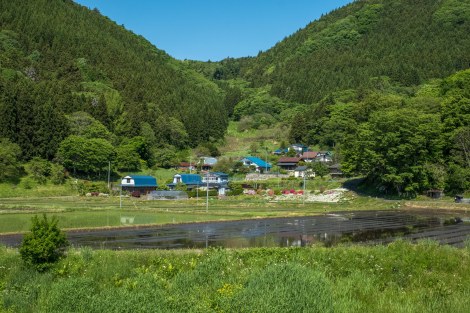 At the hostel last night during dinner, I met some train-spotters who had come to Tono for the weekend to see a steam train running on this local line that was apparently only operational on certain weekends. At Michi-no-eki Miyamori, there was a lot of information about the train, but apparently it wasn’t going to arrive near where I was for another couple of hours, so I decided it wasn’t meant to be and continue cycling.

Miyamori River Bridge (glasses bridge) -today was Saturday and there was a steam train scheduled to cross this bridge (so there were a few train-spotting-photographers waiting at the Michi-no-eki), but it wasn’t going to pass by for another couple of hours so I didn’t wait 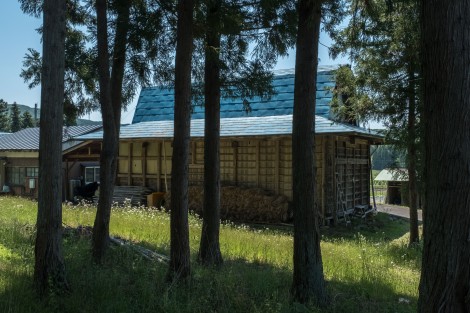 A supermarket in Tsuchizawa, Iwate Prefecture 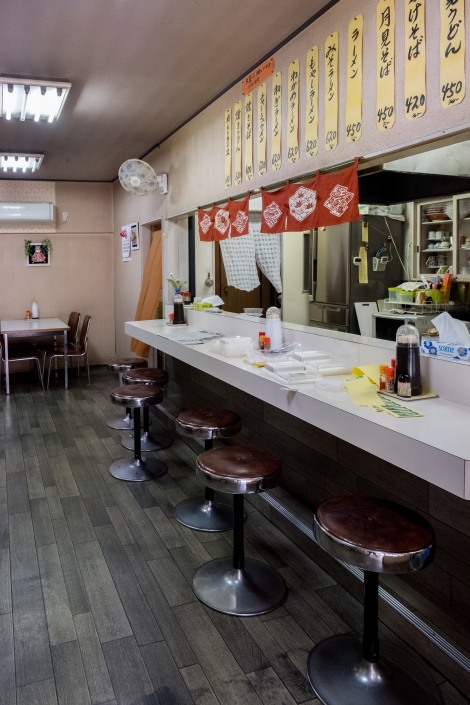 A restaurant in Tsuchizawa, Iwate Prefecture

Today I was going to be heading to Morioka, a city in northern Honshu. I had tried to find accommodation through couch-surfing to no avail, so I still wasn’t sure if I was going to stay in the city or keep going. The only thing I knew for sure was that I was going to do the ‘wanko-soba‘ challenge and was determined to eat more than 100 bowls.

I decided to do my challenge at Azumaya Honten, the main branch of a popular wanko-soba restaurant in Morioka, founded in 1907. I thought I would be coming for dinner, but Morioka was closer than I expected and I ended up there for lunch, not too many hours after having eaten a packet of hotcakes for breakfast, a garlic bread stick from the michi-no-eki, an icecream in a small town, and a few bottles of water. The conditions weren’t ideal, I was nowhere near as hungry as I thought I ought to be.

I parked my bike in a nearby temple carpark, hoping it and my panniers would still be there on my return – Japan is an incredibly safe country but I was worried I’d been pushing my luck a little far on this trip leaving my bike and panniers (with laptop inside) outside shopping malls, supermarkets, restaurants etc for hours on end!

Inside the restaurant I was taken upstairs and past tatami rooms where people were sat on the floor eating bowl after bowl of soba noodles with a server stood beside them. ‘Please don’t make me sit on the floor,’ I was desperately pleading in my head. My body is so stiff. My knees, hips and lower back are sore. ‘Please let me sit at a table with a chair,’ I kept repeating in my head.

And my angel of a server, led me to a room with chairs and tables. There was only one other couple in the room; the man’s leg was in a cast and crutches were placed beside him. This was obviously the room for foreigners and people who can’t bend their legs! I was delighted!

The server explained the basics upfront:

And so we began. The server stood in front of me and as soon as I had eaten the noodles in my bowl, she would pour the next lot in. Sometimes I didn’t even see her pour them in, it was like magic, my bowl was always full. She would chant ‘hai dan dan’ as a term of encouragement. After I had finished one tray of noodles, she would turn around and within seconds there was another tray in front of me. It was relentless! However, I found the way to slightly slow down the proceedings was to chat with my server. Chatting allowed me a few seconds to breathe between mouthfuls. Thankfully my server was just as chatty as me, actually she was wonderful. She would handpick some of the smaller portions on the tray to give me when I was starting to wain, and this small gesture made all the difference 😉 It was like a personal trainer saying, ’15 more reps, c’mon we’ve got this.’ Except she was telling me to eat noodles.

The couple opposite with the man in the cast stayed to watch my challenge. The lady had stopped around 70 and the man had eaten over 100. Their encouragement also helped greatly. After about 80 bowls I stood up briefly to allow gravity to pull the noodles down into the bottom of my stomach. Was there any room left in there? It felt like each bowl was now sitting at the top of my chest. ‘No, I will continue, this can be my dinner and my breakfast tomorrow, keep going Kat.’ At one point, I actually started to wonder if you can die from eating too many noodles, like you can from drinking too much water too fast…

I got to 100, and told my server I would stop at 110. This isn’t conventional at all. I was supposed to put my lid on the bowl to stop the challenge, but she understood and went away and came back with just the right amount. 110 seemed like a good number, more than 100, but not just 101 or 102. And so I ate 110 bowls of wanko-soba, and might just never eat soba again. 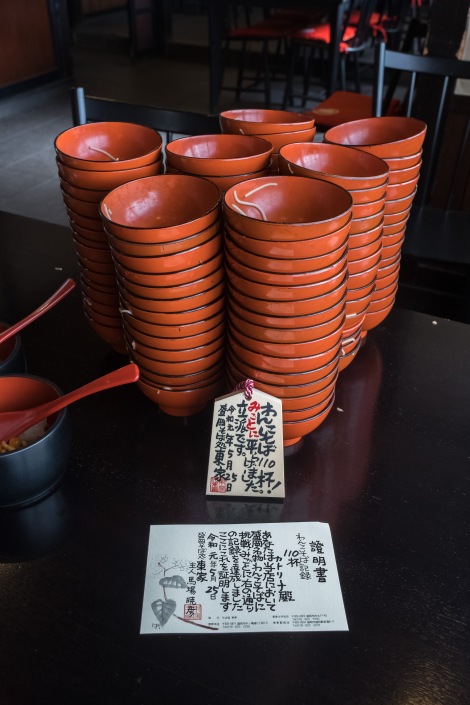 I ate 110 bowls of wanko soba at Azumaya Honten in Morioka!

A park near the castle in Morioka

It was still early and I didn’t have anywhere to stay in Morioka so I continued cycling, probably for the best to try and digest the noodles in my stomach. I couldn’t stop burping for the rest of the day, and there was no chance I needed dinner. The landscape was beautiful and I had wonderful views of Mt Hachimantai.

When I arrived at Sainokami campground, the office was closed but there were envelopes and a money box outside, so I filled in the form and inserted my camp fee of ¥800. It’s a nice campground and there’s heaps of people here, from what I can see, all car-camping. 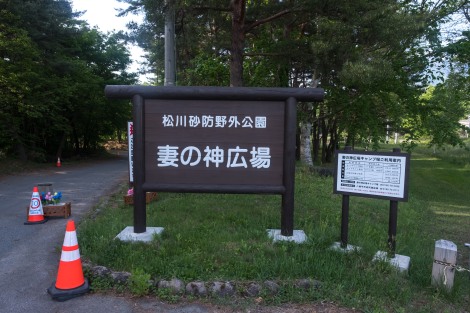 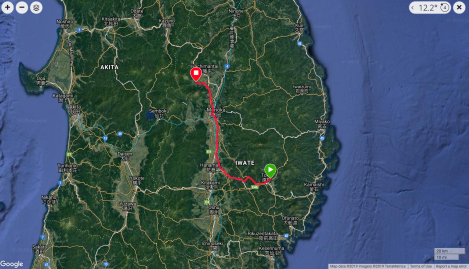 One response to “Cycling Japan – day 46 – Tono to Hachimantai”