We both didn’t get much sleep last night (funnily enough this isn’t helping my cold!) so it was hard to get going when the alarm went off at 4:30am! The day started with rolling hills and sea views and after passing Thorne Island (with a 19th century military building on it, somewhat reminiscent of Alcatraz?) we turned inland towards Pembroke.

The village of Angle was a lovely spot and when we passed a perfect piece of green lawn with a bench overlooking the bay, it was too good to resist, so we took a 30 minute power nap, me on the grass, KC on the bench. I’m not sure the residents of Angle are quite used to hikers plonking down on their grass, but it was still early in the morning, and it was oh so comfy!

The rest of the way to Pembroke however, around oil refineries was quite a schlep. We crossed through fields with a ridiculous amount of biting flies (grrrr), and lots of cows that we had to navigate around (one ran at me as I was trying to get through a gate and that certainly got my heart racing!)

Starting walking so early in the morning definitely has its pros and cons. The cons today were that there was nowhere to stop to eat or drink. We’d passed a cafe in West Angle Bay (closed as it was too early) and a pub in Angle (also closed, same reason). It wasn’t until we reached Monkton that we found something open, a Spar supermarket where we rehydrated and tried not to get carried away buying too much junk food, like kids in a candy shop finally happy to find something open! 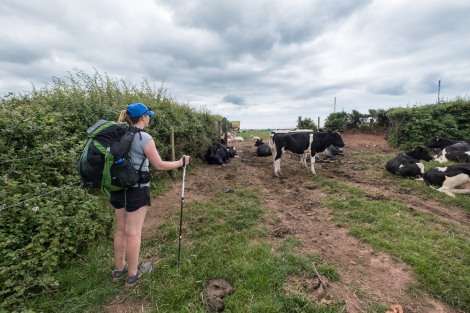 Mooove out of the way!

Shortly after, we were in Pembroke, and thank goodness the fish and chip shop was open! We’d been talking about fish and chips all morning, and Rowlies of Pembroke certainly hit the spot!

Fish and chips at Rowlies in Pembroke

After our late lunch, we headed to the nearby park to dry out our sleeping bags that got wet overnight, and one of us got a short nap in, while the other (me) had to tend to blistered feet! Don’t worry, I haven’t included a gory photo. It’s uncommon for me to get blisters nowadays, but what happened was that I put a very sticky tape on both of my little toes at the end of day 1 as they were feeling a bit squashed. However after walking through all the sand, the tape was going a bit yuck, so I decided to pull it off… and when I did, a number of layers of skin came off too. It hurt like crazy! Now, I’d originally put the tape on both little toes, so in the park after this unfortunate result, I only took the tape off one. The other one needs to come off, but I was too squeamish so it’s going to have to wait. 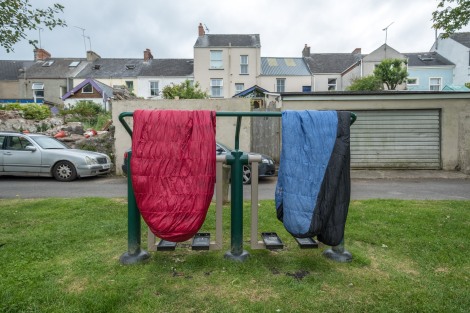 Drying out our sleeping bags in Lower Common Park, Pembroke

What do you think, could I be a foot model?

I can’t nap, I need to tend to my feet which are a little worse for wear… already!

We then continued on our merry way, past the 11th century Pembroke Castle where Henry VII was born (he was King of England from 1485 – 1509). 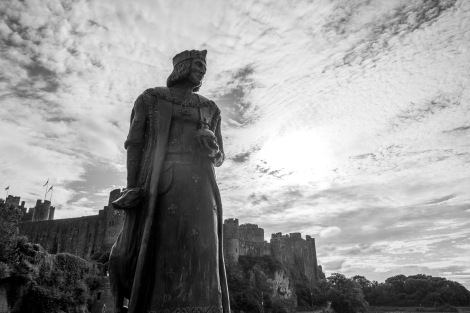 A statue of Henry VII in front of Pembroke Castle 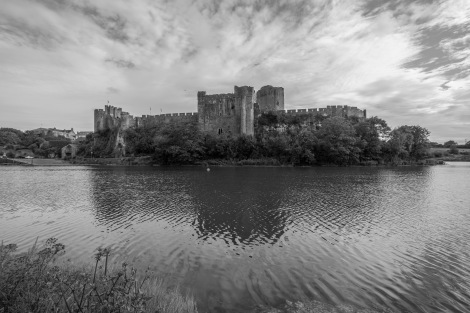 The view from Cleddau Bridge (the A477)

After crossing Cleddau Bridge and both feeling completely pooped, we eventually made it to Neyland. Trusting our instincts in a bar when we asked a friendly local if there was somewhere nearby to camp, but instead were offered a room in their vacant house that was being renovated, we gratefully accepted. After a nice hot shower, we bedded down on our inflatable mattresses on brand new carpet. (After the shower, I attempted to take the tape off my other toe, and talk about rotten luck, it pulled just as many layers of skin off as the first 😦 At least that evens things out I guess?!)