Day 12
Paradise Valley to mile 162 (as far as you can go on the PCT due to the mountain fire closure), then the Cedar springs trail to Highway 74, 18 miles.
Cost: I split a cabin in Idyllwild with 5 others, $20

Today I had a decision to make: Either continue with Alex, Roxanne, JBird & Pop from the Devil’s Slide Trail (this is who I’d been camping with for the past week but it also meant skipping a section of the PCT), or say goodbye and head back to the trail where I’d left it at Paradise Valley Cafe 2 days prior and continue as far as possible along the PCT (another 12 miles until mile 162.6 as it’s closed from here to mile 177.2 because of a fire in 2013).

I got up early and went for breakfast at The Red Kettle in Idyllwild and planned to make my decision over coffee and French toast. The Red Kettle was packed with hikers, some of whom had already hiked to 162 so I asked them lots of questions about the trail and the detour off the mountain down Cedar Springs Trail and decided that I needed to go back to Paradise Valley Cafe and walk the trail up to the fire closure (then an extra 6 miles down the hill to highway 74).

There’s a saying out here, “Hike your own hike” (HYOH) which I completely agree with. I came to America to hike the PCT so that was my reasoning for going back and continuing as far as I could before the fire closure. But it’s also the reason I decided not to take the “unofficial detour” around the fire closure. Instead I hiked the 12 miles along the PCT, down the Cedar Springs Trail to highway 74, then hitched back to Idyllwild for the night… But a lot happened leading up to this!

Cuban B and I said goodbye to the others at the cafe (knowing we would now be at least a day behind) and we walked the short distance from the Red Kettle to the highway and hitched back to Paradise Valley Cafe. The man who picked us up knew the area well and dropped us off right at the spot where we’d left the trail. We thanked the man and I started ahead of Cuban B thinking he was just behind and would pass me in minutes. 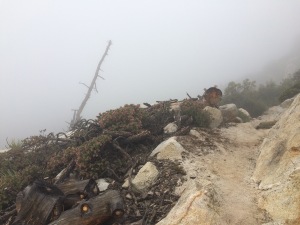 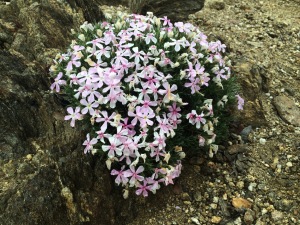 It was a lovely cool morning which I was originally grateful for as I hiked along a more “wild” trail than it had been up until now. I walked briskly as the fog started to set in and the winds picked up and I continually looked behind expecting to see Cuban B right behind me… But I was all alone.

It was eerie and I felt vulnerable. The further I went the more exposed the trail became and the harder it was to stay standing with the cross winds and rain trying to blow me over. It reminded me of one of the times I climbed Mt Fuji and was knocked over by the wind as I tried to hike around the crater.

I didn’t want to panic, what point would there be? But I was scared, I felt weak and I was worried that something bad had happened to Cuban B. 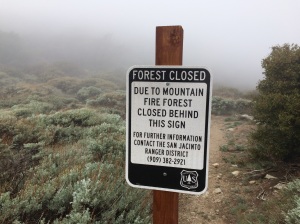 I walked as fast as I could, hoping that mile 162 would be around every corner and I could finally start the descent and hopefully get out of the bad weather. I passed one sandy area under the cover of trees where I wrote my name “Kat” and the time, in the sand with my hiking poles so if Cuban B was behind me he would know how far ahead I was… Or if something happened to me, someone would know when I passed that spot!

After 11.5 miles, only half a mile before the trail would start to descend, I saw Cuban B coming up behind me. I was so happy to see him, to know that l was no longer alone and to know that he was ok, that I turned around and gave him a big hug! Then we started down and I was so happy to be getting off the mountain.

The Cedar Springs trail down was a few switchbacks but a gentle descent that led into a farm track which seemed to last forever. On the way down we caught up with “No Trace” & “Unbreakable” (triple crowners which means they’ve hiked the 3 big hikes in America: PCT, Continental Divide Trail (CDT) & the Appalachian Trail (AT) ), Devon, “Bobberoo” and Casey. This group and Cuban B was continuing on the detour but I was heading back to Idyllwild so we said goodbye at Highway 74 and I stuck my thumb out to try to hitch back to Idyllwild, the very first time to hitch by myself.

The first car to come around the corner was a tiny convertible and surprisingly the man pulled in. I looked at the car and thought there was no chance I would fit with my pack and he confirmed this by shouting over the engine “I can’t pick you up love, there’s no room but take some of these grapefruits, picked on my orchard.” He handed me two grapefruits and was on his way.

There were a few minutes with no traffic then I could see a stream of cars coming up behind a beaten up old panel van. I didn’t want the van to stop but I needed to stick my thumb out so the cars behind could see and of course the only one to stop was the beaten up panel van. I was already nervous because I’d never hitched alone but this van that stopped was the kind of van that you see in horror movies when you’re screaming at the TV telling the damsel in distress not to get in. I walked up to the passenger side and was greeted by two men from Mexico who asked me where I was going and I said Idyllwild. The man in the passenger seat (which was a sofa seat with no seatbelt) moved into the back of the van and they told me to get in. To say I was nervous is an understatement! I got in and held my bag on my knees and as the man started to drive away I noticed all the little things about the interior. No seatbelts, loud Mexican music, barely any dials on the dashboard (I’m not sure there was a speedometer), an old bus gear stick and a hollow interior. They offered me nuts and water and we talked about Mexico and where to get good Mexican food in Idyllwild and they were both very friendly for the 10 minutes or so it took to get to an intersection with Idyllwild. They weren’t going to Idyllwild, they were bypassing it and after a lengthy conversation between the two of them in Spanish, they dropped me off on the road to Idyllwild.

It was starting to get dark and I was still cold and wet and not knowing exactly how far from Idyllwild I was when within minutes of being dropped off, a big fancy pick up truck stopped and picked me up. (Most people around here drive pick ups). The man jumped out and put my pack in the back then cranked up the heat when I got in and it was lovely and toasty!

Bob was the name of the man who picked me up and he was on his way home from a game of golf. We talked about families and golf and the bad weather and as we came into Idyllwild, the clouds parted to show Lily Rock & Suicide rock a few miles out of town so he took me up there to see the views. He also gave me the run down on all the restaurants in town and dropped me off at the Lumbermill because I said I was wanting a margarita and steak, only now just realising I hadn’t eaten or drunk anything all day because I was in such a hurry to get off the mountain and didn’t want to stop.

I ordered a margarita, water and a steak with fries and salad and sat at the bar feeling a little shaken after the events of the day. It was now dark and still raining and I didn’t have anywhere to stay for the night so while I was eating dinner I started calling all of the lodges in town. Everything was full on this Friday night in Idyllwild. I stayed as long as I could in the bar before resigning myself to the fact that I had to go and camp in the campground in the rain.

I walked through the campground with my headlight lighting the way and came across the hiker area. There were 10 or so guys standing around a campfire in the rain and as I got close to them I recognised a girl called Elizabeth who I had stayed at Scout & Frodo’s with and she recognised me too. She came over and told me I really didn’t want to stay in the campground as she had stayed the previous night and got washed out and she told me to come with her as she thought the cabin she was staying in might have a spare bed. I was so pleased at the thought of being able to sleep inside and not out in the rain!!

We walked to the cabin she was sharing with 4 others and sure enough there was a spare bed that I was able to use. I was exhausted and Elizabeth was tired too so we took a bedroom off to the side of the main room and hit the sack while the others stayed up playing cards. Thank you Elizabeth, you were my guardian angel today!

My margarita tour of the PCT