Today in a nutshell: I slept ok in the cabin and wasn’t visited by any mice/rats or other creepy crawlies (that I’m aware of). We all got up just before 6 and I started hiking around 6:30am. I was on a mission to get to Big Bear Lake today, 20 miles away.

There were a few water caches (thank you Trail Angels!), easy terrain, Joshua trees and I made it to the highway by 3pm. 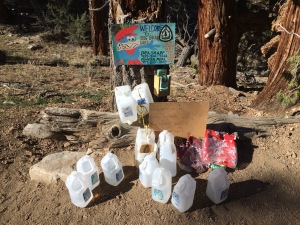 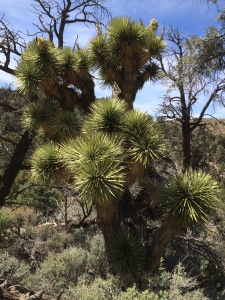 There were two older men waiting for a ride from a trail angel and Becca and Nomad were waiting for family to come and pick them up so I had an audience of 4 hikers while I stood on the other side of the road trying to hitch a ride to Big Bear Lake. It took 3 minutes and a couple of cars before a very kind lady called Noelle stopped to pick me up. She was running late to pick up her children from school so first we picked up her daughter from one school, then her son and husband from another, then we went to the post office and then she dropped me off at the hostel 🙂

I was reunited with Rohan, Roxanne, Alex & JBird. I showered and put on my rain gear while I washed my clothes and while waiting for my clothes to finish, JBird, Rohan and I decided to go out for a drink, so we went to the local nightclub, me and JBird in our rain gear… Yes, rain gear while EVERYTHING else was in the machine. I had 2 margaritas (trying out all the different types of tequila) then we went back to the hostel, picked up my clean clothes, I changed and we went out for Mexican with Alex and Roxanne too. I had been craving nachos but I couldn’t finish what had been put in front of me (my stomach has definitely shrunk on the trail).

Yep, me in my rain gear with a loaner tshirt from the hostel about to walk into this nightclub!

In the “nightclub” with JBird and Rohan 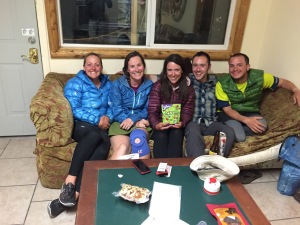 The gang: Alex, me, Roxanne, Rohan & Cuban B