I woke up around 6am and spent an hour trying to pack my bag with the bear canister before giving up and walking over to the deck to wait for the lift up to Grumpy Bears for breakfast. There were at least 30 hikers wanting to have breakfast there that morning and I was lucky to get a lift on the first ride. The kitchen was a little inundated when we all arrived so Shepherd and I played a couple of games of pool while waiting to eat. The food was worth the wait but I don’t know anyone who ordered another pancake (all you can eat), because they were so giant and fluffy! 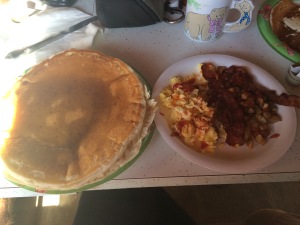 We got back to the KM store around 9:30am and it was time to attempt to close my pack, surely coffee would help! I tried a few different options, sleeping bag stuffed in first (no longer in compression sack), bear canister sideways (doesn’t fit), and finally settled on bear canister first and long-ways then everything else stuffed in around. Hopefully I’ll figure out the best way to pack it before the end of the Sierras!

There was a weighing scale on the deck so I weighed my pack and with the extra gear, bear canister, 7 days of food and 2 litres of water, it came to 41lb (18.6 kg) – at least 3kg heavier than usual 😦 … Looking on the bright side, I shouldn’t need to carry much more than 2 litres of water at a time through the Sierras so the pack weight will only decrease with each day that goes by as I eat the food…

I was the last from our group to leave and told them I would be just behind and meet up at the campsite we’d chosen, 15 miles down the trail. I turned on my Inreach device, left the KM general store and a couple of miles after starting, I received a message on my device from Howard asking where I was and saying that he was in America, a 5hr drive away!

To say I was surprised is an understatement but more than anything I didn’t know what to do. If I turned around and went back then I would have no way to tell the group that I wasn’t going to make it to the planned campsite and I also wouldn’t have our group to walk through the sierras with (possible snow, ice and many river crossings). I was really upset. I told Howard (through the Inreach, as no phone service) that I had to keep moving forward and maybe we could find a road near the campsite so I gave him the coordinates and hoped he would have better luck at finding something than what I could. He couldn’t find a road nearby. I increased my speed and caught up to Barely who was taking a break. I looked at the maps again and wondered if I could make it to Lone Pine tomorrow, 47 miles away. Our group had planned to do 15 mile days so it would mean getting ahead of them but possibly being able to see Howard and then getting back on the trail and still being able to catch up with them. This was the only option I could see and I cursed myself for getting such a late start today. I met the others at the 15 mile campsite, filled up with water and told them I was pushing on a further 6 miles. Barely has an Inreach as well so we swapped details so we would be able to keep in contact while I was away. 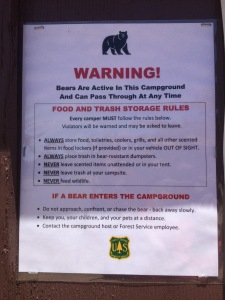 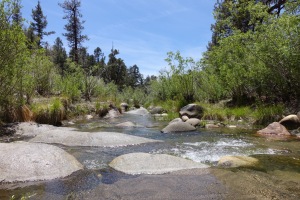 I kept walking into the dark and stopped after 21 miles at a campsite, 10200 feet above sea level. I was too tired to cook so I ate a snickers then put my bear canister away from the tent and fell asleep.