Today was stunning with lake after lake and gorgeous reflections in each one. It was a cool morning which kept the mosquitoes away but they were up with the sun which meant it was best to keep walking. 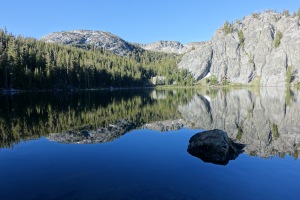 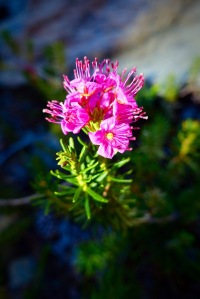 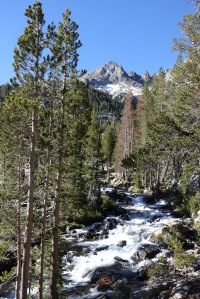 Garnet Lake on the JMT

It was hot when I arrived at Garnet Lake and KC & Shepherd were taking a break. I thought about going for a swim but then I remembered we would soon be passing Thousand Island lake which was supposedly one of the most beautiful lakes in the sierras.

A view of Banner Peak from Garnet Lake

Teflon and Mr & Mrs Smith were eating lunch inside their tents at Thousand Island lake when I arrived – because the mozzies were just that bad. I went down to filter some water and was mauled by them, all over my back and arms, through my long sleeve shirt. When I came back up the hill to the tents, Mr Smith helped to swat a thousand of them off my back before I dived into Teflon’s one person tent with her. We then spent the next few minutes killing all the mosquitoes that came in with me.

After lunch Teflon and I somehow managed to convince Mr & Mrs Smith and KC to come for a swim with us in the lake. We stripped off and swam to the island in the middle of the picture below but there were a lot of gasps and numb limbs by the time we got there. IT WAS SO COLD! We sat on the island for about 10 minutes trying to think up other ways to get back to our clothes without getting back in the freezing cold snowmelt lake! … It wasn’t so bad swimming back but the mosquitoes were again waiting for us so they could launch their attack.

We swam to an island in this lake, it was freezing!

One for the family 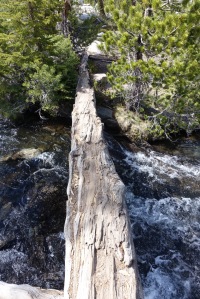 The JMT merged with the PCT again at Thousand Island Lake so we were back on our trail and soon climbing up to Donohue Pass, at 11,060 feet. The mozzies were terrible and I even resorted to wearing my headnet even though that meant I had reduced vision!

At the top of Donohue Pass we entered Yosemite National Park and all joined up again – I love my Sierra family. 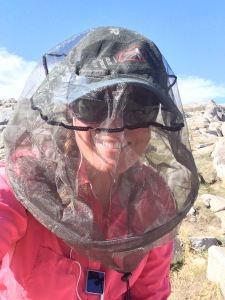 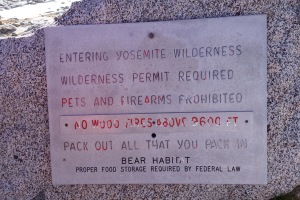 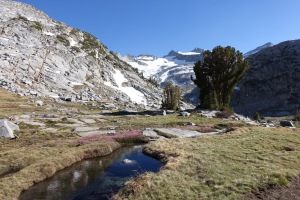 We’re camping 11 miles out of Toulumne Meadows by a raging river with, you guessed it, hundreds of mozzies. We’ve all decided that when we arrive in Toulumne we’re going to finish the JMT which hikes down into Yosemite Valley, a small 24 mile detour. This way we will all have completed the entire JMT as well (it started on Mt Whitney).

4 responses to “PCT Day 65, Rosalie Lake (JMT alternate) to Lyell Fork Bridge (back on the PCT), via Donohue Pass”