Cost: Stayed in a cabin with Mr & Mrs Smith, free

It was so beautiful cowboy camping under the stars last night. At about 1:30am I got up and walked over to the closest bridge and got this pic:

The campground was awake by 5:30am which was really annoying because today was the one day I could sleep in! I needed to go to the Yosemite Valley post office but it didn’t open until 8:30am so I tossed and turned, trying to go back to sleep but gave in and got up around 6:30am. I packed up slowly, (Shepherd had already left), said goodbye to KC and headed to the bus stop to get me to the post office. I got the first bus at 7:20am. To fill in time, I bought a breakfast burrito from the deli near the post office and charged my electronics using one of their sockets for almost an hour. I picked up my package at the post office and then realised I had a slight dilemma. I also had a package waiting for me at the Toulumne Meadows post office (that arrived yesterday once I left there!) and so I needed to get back up there before the post office closed. There are three busses that run between Yosemite valley and Toulumne – one around 7am, the other around 8:30am then 1:30pm. Apparently the 1:30pm wouldn’t get me back in time to get to the post office before it closed because of road maintenance that was being carried out – I realised all this inside the Yosemite Valley post office. The man working at the post office was very helpful and gave me some cardboard and a thick black marker so I could make a sign and try to hitch back up.

Apparently the best place to try and hitch back up to Toulumne was near El Cap so I took the bus out there (and jumped off on the way at Yosemite falls to have a quick look): 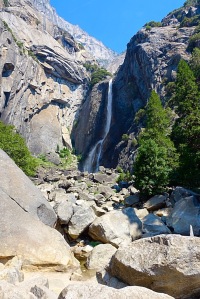 I got (back on a bus) and got off at El Cap, there were heaps of tourists and lots of cars parked along the side of the road so I thought it probably was a good place to try and get a ride. I pulled out my sign and stood somewhere the cars had enough time to see me and my sign and pull over. 3 or 4 cars did pull over – to take photos of El Cap through their car windows, not to pick me up! I moved a little further down the road, waited about 15 minutes and was then picked up by Mike, a local. Mike was really nice and had a wealth of knowledge of the area and we spoke non-stop for the 2 hours it took to get back to Toulumne Meadows – thank you so much Mike!

When I got back, Teflon and Shepherd were sitting at the picnic tables and KC was coming back up on the 1:30pm bus. I picked up my package from the post office but still had quite a few errands to do so Mr & Mrs Smith offered me a bed in their cabin. The others were going to hike out a few miles once KC got back, so we arranged to meet up with them tomorrow further down the trail. I took some dirty laundry from Shepherd & Teflon knowing I would have a chance to use a laundry and shower at the cabins with Mr & Mrs Smith.

Mrs Smith’s Aunt Mo was visiting so after I’d finished my errands the 4 of us jumped in the car and drove down to a famous restaurant in the area called Whoa Nellie Deli, inside the Mobil gas station in Lee Vining, opposite Mono Lake. I was excited to see the lake because I’d been seeing it on postcards for the last few days and knew the PCT wouldn’t go past it.  I’d also heard a lot about this restaurant from Shepherd. I ordered the BBQ Baby Back ribs and a mango margarita and everything was delicious!

Once back at the cabin we stayed up late playing canasta and a dice game with Aunt Mo, it was a terrific evening.