Shortly after leaving Furusato the trail turned uphill behind an abandoned hotel to Hirakata-toge pass with a beautiful viewpoint called Point Sabohana and a rest shelter. 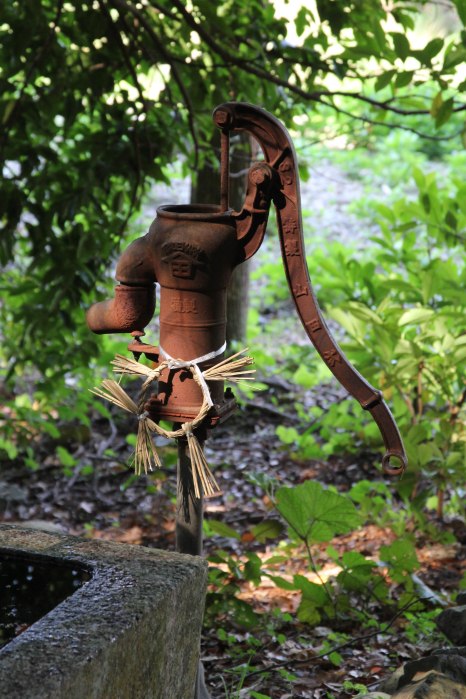 After the brief descent from this first pass, the trail followed a sea wall passing a small fishing harbour and Doze beach before joining another forest path for Miura-toge pass. Within minutes of starting this next pass, guess what? A snake. Why are they always under my feet?! A short, easy 15 minute ascent to the pass and just after starting the descent I was stopped by another snake in the middle of the path, this one was about 45cm long and a very colourful stripey orange and black. At first I thought it was maybe a tiger keelback (yamakagashi) but now I’m not so sure. It wasn’t happy to have to move out of the way and was quite aggressive (I was banging my poles on the ground to create the vibrations). It took 30 minutes to descend as I very carefully scanned the track for snakes.

8.58am, of course it’s not too early to see a four-lined snake on the trail! 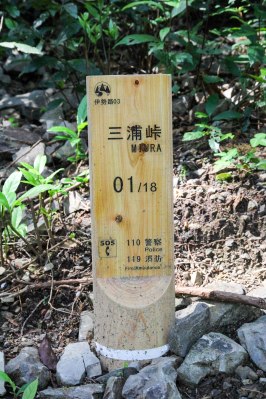 What is this snake??

It wasn’t happy having to move out of my way!

The trail joined a road and passed through the tiny village of Minose and I was grateful to pass some vending machines and buy an ice-cold coffee before starting the next pass, Hajikami-toge. At the trailhead was a rest shelter, a toilet and vending machine. Soon after I started climbing the pass I heard lots of voices and then passed a big group of scouts who were coming down the mountain. I was quite excited to see other people, especially because I hoped this meant they’d scared away all the snakes! It was another scenic pass and I was enjoying the morning.

Nice cold black can of coffee from a vending machine!

After Hajikami-toge and before Funatsu station, Okajima-san (from the first night ryokan in Tochihara) had marked a house on my map and the name Shibata, but I didn’t know what it was. As I was walking past the house (without realising), a lady working in the front garden called out and asked if I was walking the Iseji route and whether I would like to take a break. It was 1pm, I’d crossed three mountain passes and hadn’t had a break so it was perfect timing and I happily accepted her offer. She invited me into her beautiful home then dashed off to the kitchen and came back with iced coffee, tea and Japanese sweets. It was a wonderful break on a very hot day! She explained that her husband was away but he’s the one who knows a lot about the Iseji trail and they try to invite walkers in and provide drinks and a restroom whenever they can – trail angels on the Iseji route! I was so grateful to be sitting on a couch with a cold drink in my hand and my pack off my back. Thank you Shibata-san!

After 5 more kilometres along route 42 and small roads through old villages, I came to the final pass for the day, Magose-toge. The only English brochure I’ve seen about the Iseji includes two of the 20 something passes, Magose and Matsumoto, so I knew this one had to be special to be included over all the others. It was definitely very scenic especially with the flagstone path climbing all the way to the top (but I think the others have been very scenic and worthy of inclusion too!)  It took one hour to get to the top and 50 minutes to descend in my slow pace, stopping often to take lots of photos. 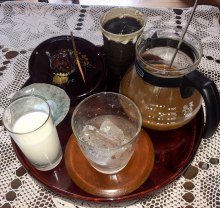 Wishing I could go for a swim too! Iseji route

Near the bottom of the pass I ran into a Japanese couple that I had met the first day I arrived in Ise when I was walking to Ise Naiku Shrine. We had started talking because we were all following the same Japanese sketch map. They had been a day ahead of me until now but it was great to meet and be able to chat with others that had just walked the same path. It turned out we were staying at the same accommodation which was fortunate for me because I had no idea where the minshuku was! They were from Chiba near Tokyo and had also enjoyed the walk but agreed there needed to be more waymarks. Our minshuku was right next to the harbour and attached to the owner’s fishing tours shop so all of the fish at dinner was freshly caught today. I really enjoyed the company and loved comparing notes about the trail from the past few days.

My room with a harbour view at Minshuku Shibayama, Owase, Iseji route