I was awake with the sunrise so I quickly got dressed and walked to the harbour to watch the fishermen unloading last night’s catch. I had time to spare because I wanted to visit the Kumano Kodo Centre which is just outside Owase (but slightly annoyingly 1km off the trail) but I knew it didn’t open until 9am. 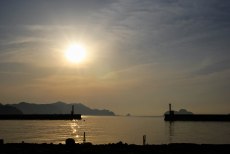 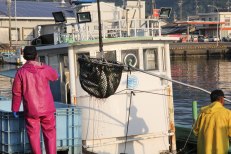 Leaving Owase was a little adventure as the trail followed an old narrow paved path between houses through an old part of town. I arrived at the Kumano Kodo Centre just before 9am but the staff came outside to tell me they were open and I could go inside. I was eager to find out what information they had in English, but unfortunately none at all. It was a massive centre with two buildings, a small theatre, an exhibition, a state of the art audio guide and Japanese maps, and this all baffled me greatly. It obviously cost a lot of money to build the centre, but why was it located here and not at the start of the trail in Ise, why was it not directly on the trail, and why was there so much money spent on this but no money spent on actually making waymarks for the trail? It would be impossible to walk the Iseji without the Japanese sketch map that I’ve been using and even with it I’ve still been lost a few times. There are little to no waymarks until you get onto a mountain pass and none of the information signs have been in English. Now I wouldn’t expect more if I hadn’t walked the Nakahechi route (which had fantastic bilingual signs) and if it wasn’t part of the World Heritage… but it has been since 2004 so why aren’t they catering to tourists, Japanese or foreign? Ok, rant over… Almost. I think it’s a shame because I’ve really enjoyed this trail and I’d love for others to be able to experience it too. Make some waymarks Mie prefecture!

I walked around listening to the audio guide (terrific), then watched the movie on the pilgrimage, had a chat with the staff, then left to really start my day and climb Mt Yaki-yama, supposedly the hardest part of the Iseji trail. 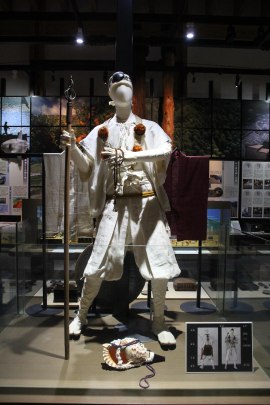 Getting to the Mt Yaki-yama trailhead at 11am after my morning at the Kumano Kodo Centre wasn’t ideal, but hindsight is wonderful isn’t it?! The ascent was mostly up a stone path which was often covered in moss and very slippery even though it hasn’t rained all week. I passed pilgrim gravestones and read how this used to be the most feared section of the Iseji because of the wolves and bandits. No wolves and hopefully no bandits today so all I was really worried about was standing on a snake and how my knees would cope with the downhill. I thought I’d reached the top twice before I eventually did, after 2 hours and 10 minutes and then took a short side trail to a large open space with a rest shelter and stunning view. The descent was often steep and slippery underfoot and took just under 2 hours.

A stone path on Mt Yaki-yama on the Iseji route 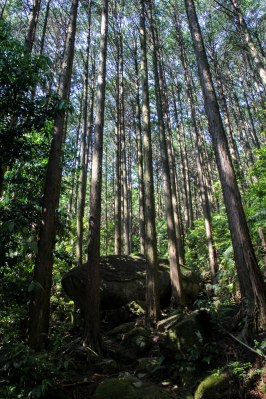 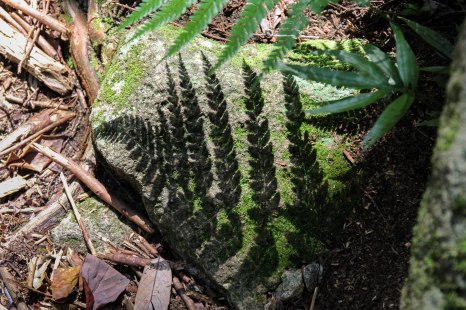 I hadn’t looked closely at today’s map so I didn’t realise there were two more mountain passes after Mt Yaki-yama and time was really getting on. They were both quite small, easy and scenic but I was definitely walking with a purpose to get out of the mountains and to my destination as soon as possible, thus the lack of photos on both trails!

It was a wonderful feeling to arrive in Kata and even though it was only just after 6pm, I knew the ryokan owner would be wondering where I was, especially now it was dark. The owner was standing outside waving to me when I finally found it and I apologised for being late (it doesn’t seem late but as dinner is usually served between 5.30pm – 6.30pm in these small villages, I’d practically arrived at dinner time). She was very nice and welcomed me into her home which is a beautiful old ryokan, then told me to have a bath and dinner would be served soon after. Waiting on the table in my room was a pot of tea and my all-time favourite Japanese sweet – sakura mochi which is pink mochi wrapped in a cherry blossom leaf – I never want to leave! I had a shower and put my clothes in the washing machine, then dressed in the yukata that was provided and went downstairs to eat a delicious dinner. The owner was apologising that it was home-made ‘inaka’ (rural) cooking, but it was so good! I’m looking forward to breakfast 🙂 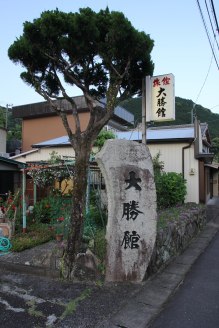 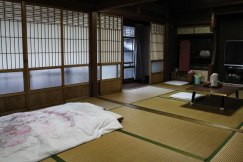 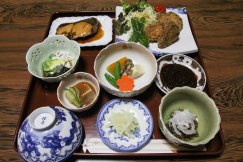