Before checking out this morning, I started looking at options to get back to Tokyo from Hokkaido at the end of the trip (my flight back to London is from Tokyo). I know I’m not in Hokkaido yet, but I will be tomorrow, and I’m assuming I’ll have less wifi there so it would be best to figure this out in advance. JALABC, the company I used to send the bike from Tokyo airport to Kagoshima when I arrived, has a desk at Sapporo airport, so I can use them again to post the bike which is good to know. I also looked into flights with Jetstar and ANA. ANA has a special ticket called the ‘Experience Japan fare‘ for foreigners, but the times don’t look so good, so flying with my bike on Jetstar is currently looking like the cheapest and best option.

It was a windy morning leaving Aomori while I continued up the coast.

There’s not much to say about today’s ride, there wasn’t too much to see and not many places to stop either. The wind kept up all day but the rain that was threatening, never reached me luckily.

I stopped for dinner at a Lawson convenience store in Mutsu that had indoor seating with charging plugs. While I was there, a guy called Yamashita-san came and sat beside me to also have dinner and it turned out he had been cycle-touring around Japan for over a year now. He was on his way back from Hokkaido and had heaps of great tips for me. He also told me about an app for my phone that shows you where there’s nearby wifi called Town wifi, as well as a good weather app called Tenki.jp. We eventually had to say goodbye because it was getting dark and we both needed to find somewhere to camp. Thanks Yamashita-san for all the advice 🙂 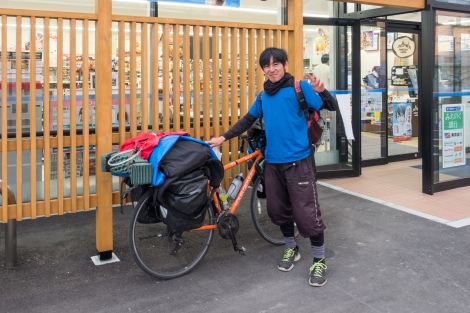 This is Yamashita-san, he’s been cycle touring around Japan for over a year already and had heaps of great tips for me, thanks! 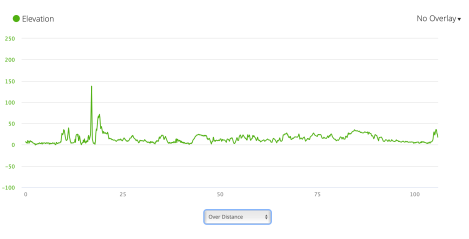