I was up early and said my goodbye’s to Patrick and Markus as they were heading to Rishiri and Rebun Islands.  I had decided not to go to there on this trip (the weather forecast wasn’t looking good for the week ahead), and instead I would head to my goal, and then meander back to Sapporo. My first stop was the michi-no-eki next to Wakkanai station to use wifi and charge some electronics.

Apparently cyclists and motorbike tourists used to camp in the above breakwater dome, but it’s not permitted anymore and there’s an abundance of signs stating this. It’s a pity, it would have made a perfect spot for last night. 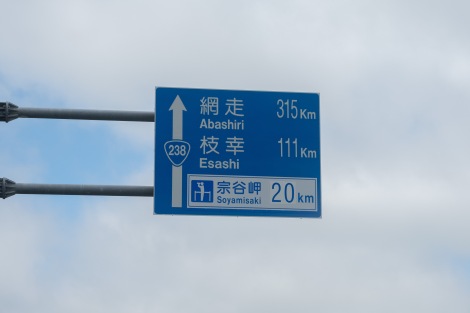 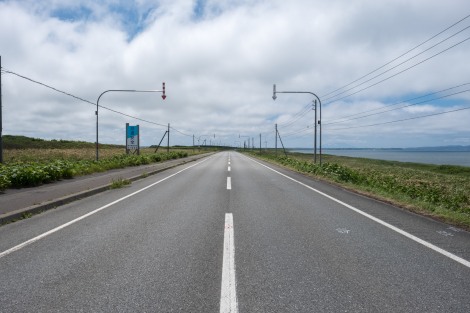 I continued along the coastal road, Route 238, and unbelievably on this overcast day, I got my last glimpse of Rishiri island across the sea (most noticeable because of Mt Rishiri, the cone shaped mountain that makes up the island). 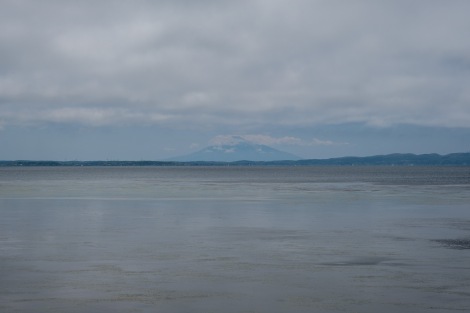 The only picture I have of Rishiri island! (The mountain across the sea)

Takahashi-san had recommended that I take a detour up Soya Hill on Route 889 in order to reach Cape Soya. It was a cold and windy detour; the wind here feels like it’s coming from the arctic, but I guess it was worth it to see the landscape even through the mist …To the detriment of my fingers which I could no longer feel.

Detour up Soya hill (Route 889) – it was mostly overcast and freezing cold!

The view from Soya hill, Route 889 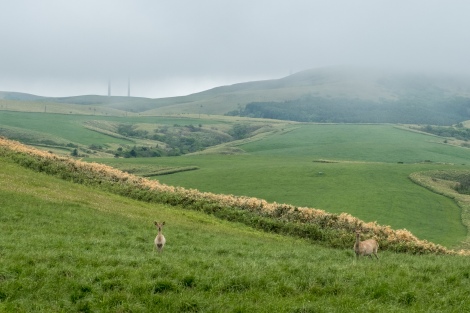 Coming down the hill before reaching the cape, I arrived at Soya Park with three monuments:

A prayer monument in the shape of an origami crane in memory of the Korean Airlines Flight KE007 that was shot down by Russian fighter jets on September 1, 1983

And then at the bottom of the hill, I finally arrived at Cape Soya, the northernmost point of Japan, after 60 days and 4007km. There was a group of people waiting for me, including Takahashi-san and some motorbike tourists that I’d met yesterday and earlier today and they cheered me on as I rode into the carpark, bringing tears to my eyes.

I’m not sure I believed I could do this. I’ve never been on a bike tour before and my panniers only arrived the day before I left London, so the first time I tried riding my bike with all of my gear, was day 1 when I left the hotel on the hill in the rain in Kagoshima. Thank goodness for that Cycle Base Asahi that I passed after the first 5km for correcting my handlebars which were all tangled up meaning my brakes didn’t work! (And for telling me their shop could be found all throughout Japan, I’ve stopped at 6 of them now!)

So the moral of this story is that you never know until you give something a try, but if you really want to succeed at something, then maybe you can. I wasn’t sure if I could do this, but I really wanted to so I kept envisioning myself at the end. And here I am, woohoo!

A bus load of tourists had arrived shortly before I did, so there was a long queue of people waiting to take their photos at the monument. I joined the queue and thought about the past 60 days… the people I’d met, the kindness and generosity I’d received, staying with Warmshowers and Couchsurfing hosts who were like long lost friends to me now, the sunburn, the rainy days, the hills, how strong my arms have become from pushing the bike, the festivals, the food, camping in all manner of places, how I still don’t like bananas and how it feels like with the right black-out curtains I could sleep for a week! I’m proud of myself and my awesome Dawes Karakum bike and in particular, the Schwalbe Marathon Plus tyres, not one puncture while cycling the length of Japan!

I made it to Cape Soya! 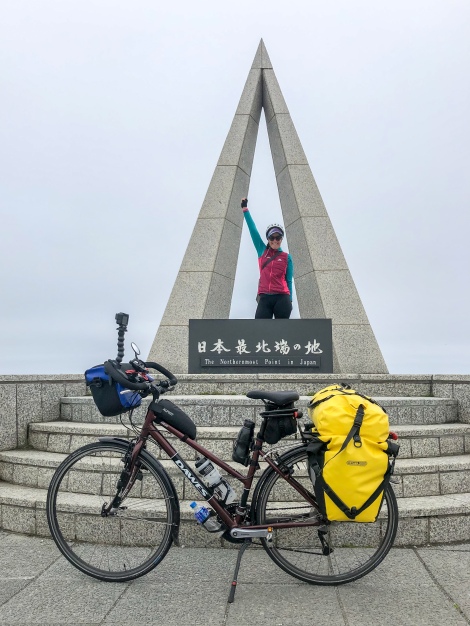 I made it to Cape Soya!

I made it to Cape Soya! Notice the temperature on the sign behind me, 12.7 degrees celsius!

It was way too cold to hang around long at Cape Soya, the wind was biting and I was frozen to the bone. Onwards, if only to keep warm. Actually, what I should’ve done was book into a guesthouse at the cape. I was tired and it was cold, and it was quite miserable continuing on after having reached what for so long was my goal. I plodded on, quite slowly, spent time with some curious foxes, had a nap in the next michi-no-eki and spotted quite a few White-tailed eagles soaring above me, and sitting on the beach.

Playing peek-a-boo with a Hokkaido fox

Thanks for posing in the middle of the road Mr Fox

In the afternoon, I bumped into Ivan. We’d both never met before but we instantly recognised each other from the Facebook cycling groups. Ivan had actually cycled backwards to come and find me after meeting some Japanese people who told him where I was. We met at this Seico Mart and then cycled together before parting at the Rider’s House where he was staying.

Ivan from the UK

I continued on with Hori-kun along a quiet stretch of road called the Esanuka line, a famous road for photography apparently.

We made it to the campground by Lake Kutcharo and after a dinner of ramen, I hit the sack, exhausted.